In the past year I succumbed to the allure of two of Leo “Tod” Todeschini’s products: a table knife and a baselard. In the late middle ages baselards were big knives with H-shaped hilt hung from the belt between the legs (in barbarous northern countries) or at the right hip (by polite and civilized Italians who had other ways to show they had something long and hard between their legs). He offers two standard models, one which was popular in the Alps and another which was more common in northern Italy and England.

Tod is a brilliant cutler. He captures the essence of knives as objects of lust which you buy and carry against your better judgement. (People in the fourteenth and fifteenth century were not idiots, their coroner’s reports and city statutes show that they knew that when young men start carrying big knives some of them will stab each other with them- and Chaucer always tells you what kinds of knives people are wearing, and whether they are mounted with silver or brass). Tod includes scabbards and suspensions which let you understand knives as accessories not just as something to hang on your wall or leave in your kitchen or your travel chest. The scabbards are painted in a single colour like many originals and lightly tooled like finds from the Thames and the Low Countries. The brass chape is brazed so well that it is hard to see the join (whereas most of the originals Mark Shier has handled are just overlapped or stapled closed). The baselard is beautifully finished, with the nails evenly peened and the wood smoothly set onto the iron core, and has a pleasant substance in the hand thanks to the thick, heavy forte of the blade. The 44 cm length of this baselard is pretty typical (there were a few smaller examples, and many the size of a sword). (Parenthically, his working, table, and kitchen knives would make excellent gifts for a chef or camper in your life). But there is one thing about this knife which is not ideal for me.

END_OF_DOCUMENT_TOKEN_TO_BE_REPLACED

A few people have recommended Martin Gurri’s The Revolt of the Public and the Crisis of Authority in the New Millennium (second edition 2018, available on Bookfinder) but I don’t understand the author’s ideas as they are presented on his blog and in interviews. Granted that he writes his blog in a poetic style, where key concepts are never defined because you are supposed to roll them around and absorb the general meaning in terms that make sense to you.  I suspect that some times he says something he knows is not quite right because it will provoke readers or catch their attention. I would like to see how his book defines elite and why (to me, it seems like the period since 1990 has been hard for journalists and experts in bureaucracies, but great for the rich and academics). In 2017 he paraphrased José Ortega y Gasset that “The quality that sets elites apart – that imparts authority to their actions and expressions – isn’t power, or wealth, or education, or even persuasiveness. It’s integrity in life and work” but he also said that elites are those who “run the great institutions of the industrial age,” and I can’t reach from one definition to the other with a barge-pole made up of recycled Margaret Wente columns, Theranos stock certificates, and prospectuses for investors in Dalian, China.

I am confused by his prescription in ‘Has Government Failed?’ because that sounds like the response of the officeholding class, bureaucracy, and old-media commentators to critics in Canada: “you ask us to stop doing some evil thing, and we understand your idealism but that is just not practical for reasons which we can’t quite explain.  Yes, we told you we would do it if you elected us, and its a matter of a few thousand words of legislation or a few phone calls to officials and police departments, but its much too difficult, maybe if you re-elect us we can make time for it then?”  Contrarians in the United States often present climate change as a sinister plot to engineer society by distant intellectuals, and Gurri places such a scheme in the mouth of his ‘elite’, but in Canada it is grasasroots environmental organizations, small parties, and First Nations who push action and large business owners, the Liberal and Conservative party machines, and Old Media commentators who try to diffuse and delay.
END_OF_DOCUMENT_TOKEN_TO_BE_REPLACED

People representing Median, Persian, or Saka soldiers at Plataea in 2021 will need trousers. Not everyone needs them: the King rules many lands full of all kinds of men, many of whom have not adopted the Median dress. But reenactors representing men (and possibly women?) from those nations will need them.

One kind of evidence to use is artwork. Aside from the reliefs from Persepolis, the goldsmith’s work from Scythian tombs and the Oxus Treasure, and the mosaic from Pompeii which everyone knows, you will want to have a close look at some of the glazed terracottas of servants from Susa in Forgotten Empire: The World of Ancient Persia or on achemenet and of course at the tomb paintings from Tatarlı, Turkey.

By far the most important archaeological find are the trousers of saltman No. 4 from Chehrābād, Iran, radiocarbon dated to around 405-380 BCE. The saltman is still wearing trousers tucked into his shoes and covered by the skirt of his coat, and all of the textiles are so delicate and salt-encrusted that they cannot be removed, spread flat, and examined. What we know can be summarized in the following few sentences:

There is no published information about stitches, thread, or dye of saltman 4’s trousers (the cloth looks natural white to me). Edit: Dr. Grömer describes the trousers and tunic as “made of a sturdy, plain natural white woollen cloth” (aus robustem einfarbig naturhellem Wollstoff bestehend).
END_OF_DOCUMENT_TOKEN_TO_BE_REPLACED 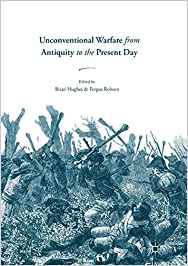 Brian Hughes and Fergus Robson (eds.) Unconventional Warfare from Antiquity to the Present Day (Palgrave Macmillan, 2017) circa 80 Euros on Bookfinder

I borrowed this volume in hopes that it would have more clues as to the oldest source for Good King Robert’s Testament (it did not, although Alastair John MacDonald very kindly helped me with modern editions of the Scotichronicon). But I ended up reading about half of it (skipping the chapters on 20th century warfare such as Julia Welland on NATO’s unlucky intervention in Afghanistan and Raphäelle Branche on French Algeria).

The book is in reverse chronological order, but lets begin with Tim Piceu describing an outbreak of small war in Flanders as the Dutch Republic and Hapsburgs wrestled for control (p. 160, 164)

Freebooter raids generally started in a tavern in one of the above-mentioned frontier towns or in a town in the island of Walcheren (Zeeland). There a group of around a dozen men- no women are known to have been freebooters- discussed a tip received by a local informant who knew of booty. Although frebooter bands acted under the guidance of an experienced marauder, the conducteur, and some friends raided together, there seemed to be no regular composition of the crew. Everybody who had the courage could join in. If the value of the booty outweighed the risks, the group would decided to leave for enemy territory. They packed their weapons and victuals for some days, dressed themselves like peasants, and slipped past enemy posts to a hiding-place in enemy territory. The sources mention freebooters carrying a vaulting-pole to move across the many Flemish creeks, ditches, and tidal inlets. Travelling happened mostly at night and the band avoided major roads. … Most freebooters probably used their takings for living expenses, paying off debt or, to quote a Dutch civil servant, ‘to indulge for a little time in a bad and godforsaken life of drunkenness and whoring.’

You all meet in a tavern, forsooth! And every gamer agrees with that Dutch civil servant about the proper way to spend the spoils of an adventure, even if they have not read sources from the Wars of the Low Countries or the Yukon Gold Rush.
END_OF_DOCUMENT_TOKEN_TO_BE_REPLACED

Robin Reich, “Historians have too Many Learning Objectives” (In the Anglo tradition) history as a field does not explicitly discuss our basic assumptions, methods, or theories and so what we as historians agree on we only pick up informally or through snippets and crumbs dropped by our advisers. In my undergrad curriculum at a small... END_OF_DOCUMENT_TOKEN_TO_BE_REPLACED